How it felt to lose all of the hair on my head and body as a result of chemotherapy to treat breast cancer, following my mastectomy.

Two years ago my hair began to fall out.

I had a great summer lined up in 2016 – Chelsea Flower Show, Wimbledon tennis, both of my children’s graduations, and a holiday in the vineyards of Bordeaux. I didn’t expect to be going to any of these events as a bald woman – but that’s what I did; with the exception of Chelsea which I missed altogether.

As soon as I was told that I’d be having chemotherapy as part of my treatment for breast cancer, I began to think about what it would be like when I started to lose my hair. That I would lose my hair was a certainty. One of the main side effects of my type of chemotherapy drugs, Taxotere and Cyclophosphamide, is hair loss, and not just the hair on my head!

I was offered the option to use the cold cap, or scalp cooling, which I could wear when the chemotherapy was being given. Many women use this and find it to be very helpful in keeping most of their hair. I decided not to, as it meant a lot longer sitting in the chemo suite before and after treatment, and I’d heard that it can induce some very severe headaches – like brain freeze when you eat too much ice cream at once!

What I did accept from the NHS was the offer of a wig, although I didn’t hold out much hope of finding one that was the equivalent of my hair colour and style – the idea of long blonde or auburn flowing locks strangely didn’t appeal to me. However, two weeks after my first chemotherapy infusion, the wig fitting service at Mount Vernon Hospital came up trumps and I was the proud owner of a delightful short, white wig which looked remarkably similar to my own head of hair. I wasn’t sure that I would wear it, but I found it comforting to know that it was available if I couldn’t cope with going out in public as bald as a coot.

I noticed that my head hair was falling out twelve days after my first treatment. It started as a small clump of hair and quickly progressed to handfuls. I discovered that every time I touched or scratched my head great plumes of hair would come out and land all over my clothes and on whatever chair I happened to be sitting on.  I hated having bald patches in my hair. So I decided to visit my lovely hairdresser, Jade, at The Wonderlab in Chorleywood and ask her to clipper my hair down to a number two.

Jade had known that this was coming and was so sensitive and caring about the whole situation, and made it as good an experience as it could be. She also refused to accept payment – a beautiful gift for her to give to me.  I felt really exposed when I left the salon and was convinced that everyone was staring at me. Of course they weren’t but I felt compelled to run into the nearest charity shop – luckily Chorleywood has great ones – and buy a hat; any hat would do to give me the illusion of being invisible again.

I’ve always had short hair and so thought that being bald would be easy. It took time to get used to, but after a few days I found the physical part of it not too difficult to cope with, especially at home. It was spring and so not too cold, and I was used to feeling the air on my ears and neck. The psychological part took longer to come to terms with, but gradually I became more at ease with my baldness and I actually only wore my wig once.

My second chemotherapy treatment coincided with probably the most poignant event in my cancer experience. Despite having had my hair clippered really short, it was still falling out fast. I’d had enough of this and asked Liam if he would shave it all off. He’d only been out of hospital for three weeks following heart surgery but luckily he had enough strength to do what I’d asked. I will never forget how it felt to have my husband wet shave my head or how sad and upset he looked as he was doing it. This act of care and kindness brought us so close to each other despite it being a time of such desperate adversity, sadness and vulnerability.

Now I was completely bald; but not just on my head. All of the hair on my body had fallen out. My pubic hair was the first to give up the fight, closely followed by my leg, armpit, arm, and even nasal hair. I did wonder why my nose was constantly running! Just when I thought that I’d lost all there was to lose, my eyebrows and eyelashes departed too. Who knew how different one’s face could look without eyebrows and eyelashes? It really is not a good look!

There were a few positives in all of this. I didn’t have to shave my arms or legs for the whole summer and I could go without my usual six weekly hair cut. Not to mention the extreme Brazilian down below! Plus, I had the perfect excuse for buying hats, which I’d always wanted to do but could never justify the expense. So I bought a wonderful Panama type hat which I wore in France when it was so hot that my head would have burnt, and a great baseball cap from Wimbledon which sadly I needed to keep my head warm and dry – yes it rained for most of the day that I had tickets for.

One other positive that I want to mention. I grew in confidence and totally accepted the way I looked as a bald woman. I found it empowering to go out without a wig, scarf or hat and couldn’t care less if people stared at me. I realise that not everyone feels the same way, but for me it was very liberating.

So much so, that I didn’t wear my wig at Dan’s and Laura’s graduations in July. By this time it seemed normal for me to be bald and they both encouraged me not to wear the wig, as did Liam.  Both separately told me that they would rather have me as I actually was at that moment in time rather than pretend that I had hair. I love my family so much! 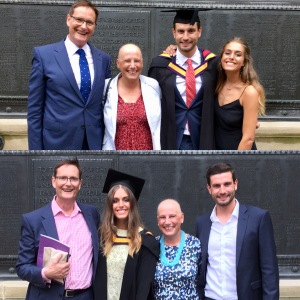 So it was that I went to Manchester University twice (different dresses of course!) and have many precious photos of my family and I; very happy and with no hair on my head. I will always have these memories of a difficult time in my life that I went through and came out of as a stronger person. I was supported by my husband and children who accepted me as I was at that time and enabled me to enjoy these milestones in our lives without worrying about my appearance. Great times indeed.

View all posts by diddy2309

5 thoughts on “To baldly go”

Today is the publication day of @poornabell wonderful new book, #Stronger
Wow, I’ve never grown anemones before. I’m in love with these two grown from corms from @gandgorgeousflowers Note to self - find a greenhouse & grow loads more next year
How lucky am I?
I’m still doing Facetime therapy & I still prefer face to face. Only 3 more weeks & I can go back to the familiar room with the familiar chair again. Sleep not so good right now.Pain gets in the way #covid365 #coronadiary #coronajournal #iamwriting #writingthroughlockdown
I was quite content on Day 3 but seemed to be worried about a stuffy nose. It was unclear what the symptoms of coronavirus really were so thought that every cough or sniffle could be the virus. Volunteering came to nothing. They couldn’t verify my ID. I remember being really pissed off about that. How dare they reject me!! #covid365 #coronadiary #coronajournal #iamwriting
I love this logo for the new @5kyourway podcast. Can’t wait to listen to it & the guests that they’re going to have. So many wonderful stories of the lives touched & supported by the charity & @movecharity. There’s ready a YouTubechannel where you can watch loads of videos of previous inspirational interviews & exercise ideas.